Sometimes couples need a “cupid” to bring them together, but sometimes all you need is a little spark in high school and a good game of bowling! Meet Sydney and TJ, the soon-to-be Mr. and Mrs. Estes… This sweet couple is good friends with our lovely intern, Keenan, and she reached out to them to tell their love story! Enjoy! 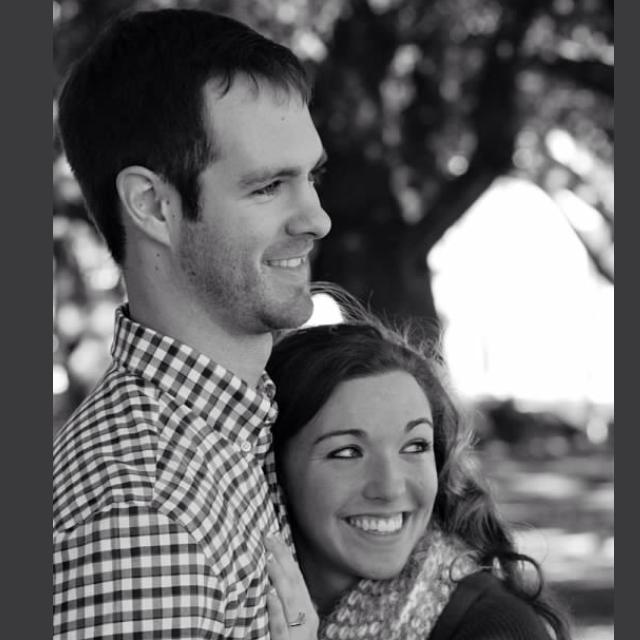 TJ and Sydney first met in high school. However, their relationship did not truly blossom until the end of their freshman year at Clemson. They officially started dating on June 2, 2012. On their first date he took her to go bowling and then to Olive Garden. “I never knew why he chose bowling, but that was one of the best times we ever had. We got to talk, laugh, and do something active together,” said Sydney. “On our first date, she told me how competitive she was and that she would beat me in bowling. I did the gentlemanly thing and kicked her butt,” TJ said jokingly, “I beat her by 100 points at least. Once I showed her who was boss, we had a good time together and went to Olive Garden. That is still our favorite restaurant to visit together. But on a serious note, I knew this girl was different from that very first night, when I came to her house. We connected on a different level than I had with any other girl. I acted like my normal goofy self around her and she just laughed. Sometimes her little nerdy side would come out (it still does), and I think that is the part of her that I love most.”

“I only knew one thing when I wanted to propose to Sydney… that I wanted to do it at the Battery. We have taken several walks down there as a couple and picked out our dream houses that I am going to buy for us in the next year or… eventually.

The challenge of proposing at the Battery was that I needed 15 people to be able to view the event without Sydney noticing her family members or their cars. I also needed a way to get her there wearing nice clothes… and having her nails done was a plus (since apparently that was very important).

I called up my friend, Shawn Ferguson, who lives in Charleston. Through the use of Google Earth, we mapped out where the family would be located in the park. Shawn and his wife Karlee dropped us off 2 blocks from the Battery to meet a friend and “plan next week’s bible study.” Then the walk started… We got one block before I realized I might legitimately throw up. I pulled it together and tried to have a deep meaningful talk with Sid about our relationship. In the moment, she felt school was more important to talk about, evidently she was excited about having fewer test this semester and only a few big papers. Nerd.

When we got to the tree I was struggling to get the conversation to turn to serious, and then some kid runs up out of nowhere. What are the odds? I mean seriously… Sydney loves kids, and she wanted to play with him. I wanted him to see the evil look I was sending his way so that maybe he would run screaming to his parents (who were nowhere in site). The kid was pretty serious about playing in THIS tree; So I gave up and moved her around to the other side of the tree.

At this point I had lost all train of thought, and I felt like I was getting sick again. I had to go for it. I tried to pull the ring out of my pocket while I was leading up to the question, but it got stuck. We had an awkward moment were she was looking at me like ‘Are you serious, is this it?’ Yep, this was it. She started balling. I had to ask her again to marry me a second time because she never gave me an answer. She finally said “yes”, and the family started showing up. Pictures followed after I that. After she said yes, I didn’t care much about the rest… I checked out. She said “Yes!” My job was done, and thank the Lord she actually said yes,” said Tj.

“We are excited to start our lives together and are so thankful to our family and friends that supported us these past few years,” exclaims Sydney.

Sydney and TJ will be getting married on January 2, 2016. And they are both looking forward to life together! So who’s your cupid?! Did you have someone help you and your sweetie get connected? Or is your story more like Sydney and TJ’s, where all you needed was a little bowling and a lot of love?! You can send your story to heather.burrow@wedding101.net, and maybe you’ll find yourself on the blog next!